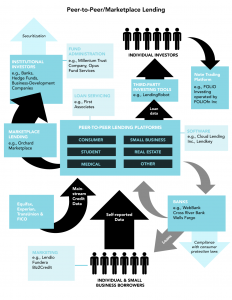 “The collapse of the financial system starting in 2008 shattered public confidence in the traditional intermediaries of the financial system – the regulated banks. Not only did the mainstream financial system implode leaving millions of borrowers baring an extraordinary debt burden, the contraction that followed left individuals and small businesses cut off from fresh sources of credit. “Disintermediation,” the idea that we can have credit without banks, became a political rallying cry for those interested in reforming the financial system to better serve the interests of consumers. As the Financial Times has put it, peer-to-peer lending companies offered to “revolutionize credit by cutting out, or disintermediating, banks from the traditional lending process.” Although the amount of credit available through peer-to-peer lending is miniscule in comparison to traditional credit, the public attention given to this phenomenon is significant.”

This primer maps the peer-to-peer/marketplace lending ecosystem in order to ground the Data & Fairness initiative’s investigations into its benefits and challenges and potential for fairness and discrimination.