Alternative Influence offers insights into the connection between influence, amplification, monetization, and radicalization at a time when platform companies struggle to handle policies and standards for extremist influencers. The network of scholars, media pundits, and internet celebrities that Lewis identifies leverages YouTube to promote a range of political positions, from mainstream versions of libertarianism and conservatism, all the way to overt white nationalism.

Notably, YouTube is a principal online news source for young people.1 Which is why it is concerning that YouTube, a subsidiary of Google, has become the single most important hub by which an extensive network of far-right influencers profit from broadcasting propaganda to young viewers.

“Social networking between influencers makes it easy for audience members to be incrementally exposed to, and come to trust, ever more extremist political positions,” writes Lewis, who outlines how YouTube incentivizes their behavior. Lewis illustrates common techniques that these far-right influencers use to make money as they cultivate alternative social identities and use production value to increase their appeal as countercultural social underdogs. The report offers a data visualization of this network to show how connected influencers act as a conduit for viewership. 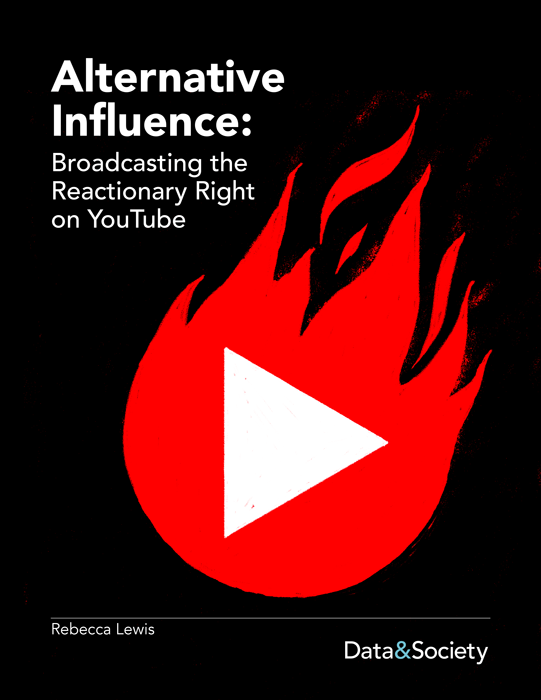 "Social networking between influencers makes it easy for audience members to be incrementally exposed to, and come to trust, ever more extremist political positions."
– Rebecca Lewis, Alternative Influence

Lewis’s work brings up important questions for deeper consideration, such as:

This report is part of the Media Manipulation Initiative at Data & Society.